I wrote this flash story for the YeahWrite weekly fiction challenge. To post in the challenge, I had to meet two prompts: the theme of redemption, and the quote “That’s a weird place for a goat.” The maximum word count was 750 words. (I couldn’t resist the goat prompt.) The story won the week’s popular vote, as well as an Editor Pick. Yay! I hope you enjoy this little bit of silliness.

Edited to add: I updated the story to reflect suggestions from readers. This is the final version that was submitted to WOW! Women On Writing’s Fall 2018 Flash Fiction Contest. 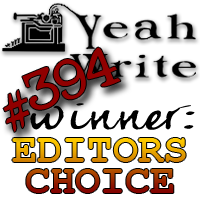 Bobbie Sue leaned over the kitchen sink, licking frosting off a cherry pop-tart. She peeked out the window, and sure enough, the dawn light illuminated that damned goat, asleep on top of her car again. She also noted that her husband’s truck was finally home, but she was more concerned with the sleeping trespasser.

Red Angus had moved into Bobbie Sue’s yard a few weeks earlier. The first thing he’d done was climb on her old junk-heap station wagon and eat the vinyl that had covered the fancy half of the roof. Then he’d collapsed into a satisfied-goat coma, snoring and drooling all over the side of the car. She’d been shooing him away every morning since, hoping he’d move into the neighbor’s yard instead.

She shoved her size-11 feet into fuzzy pink flamingo slippers and stomped toward the front door. Her husband, Stetson, sprawled across the recliner in the living room, eyes partially crossed. Bourbon fumes tainted the air.

“How was the poker game?” she asked.

He rubbed his face. “The usual.”

A stripe of pale skin encircled his naked ring finger. Bobbie Sue scowled. “Stetson, where the hell is your wedding ring?”

“You bet your wedding band?”

“Thought it was a sure thing, but Sprocket had three of a kind.”

Bobbie Sue pinched her nose. The hangover stench grew stronger with each word he spoke.

“Seriously,” he continued. “What’re the odds that he’d have kings, too?”

“That’s five kings, Stetson. What kind of deck were you guys playing with?”

“We had to combine a couple of old decks after the first one got ate up in Joe’s fan belt.”

“How… never mind. You go get that ring back, right now.”

“Fine, I’ll get it myself.” She grabbed her car keys and headed outside, only to find Red Angus still snoring on top of the station wagon. She pursed her lips and studied the goat.

She yanked a bungee cord off the barbecue grill, attached it to the car’s bent luggage rack, slung it over the sleeping goat, and secured it to the door handle on the other side. Satisfied that Red Angus probably wouldn’t go soaring off the roof at the first stop sign, she climbed in and revved the engine.

The goat was still asleep when she arrived at Sprocket’s trailer, five blocks south. The station wagon crunched over dead lawn, halting next to the front step.

Bobbie Sue un–bungeed the goat and lured him off the car with a pop-tart she found in the pocket of her bathrobe. She wrenched the screen door open and marched in, Red Angus snuffling along behind her.

Sprocket was lying on the floor in his underwear. The trailer was in worse shape than usual — the poker table had been wedged into the tiny efficiency kitchen and half-empty bottles littered most of the horizontal surfaces.

“Wake up, Sprocket.” She nudged him with a flamingo-clad toe.

Red Angus shuffled into the kitchen. A metallic crunching sound followed, but Bobbie Sue ignored it. She prodded Sprocket again.

He tried to sit up. “I must be having delusi…nations again,” he mumbled, squinting at his kitchen–poker-table. “Looks like a goat.”

He sagged back down to the floor, so Bobbie Sue gave him another kick.

“I want Stetson’s ring back.”

“Why is that goat in my house?”

“I’m offering you a deal. Give me the ring, and I’ll let you keep the goat.”

“I don’t want a goat! For fark’s sake, he’s eating my poker table.”

“Okay, here’s a better deal. Give me the ring, or I’ll abandon Red Angus in your kitchen.”

She fished some pop-tart flakes out of her pocket to entice the goat outside, then tossed the crumbs into the backseat of the station wagon. Red Angus clambered in after them.

“Once Stetson has to sift through your poop to get that ring back, he might not be so eager to lose it again.” She started the car, eyeing the goat in the rear view.

“Nice job back there, Red.” He settled onto the worn seat and licked up the crumbs. “Maybe I’ll let you stick around.”

Red Angus tongued the vinyl armrest all the way home. 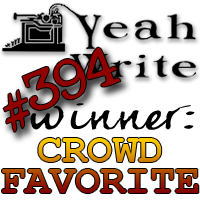 Microfiction about tragedy in a small town: Restoration in XRAY Lit. Nominated for Best Microfiction 2021!

Author’s favorite: The Potential of Radio and Rain A hopeful flash at New World Writing!

New! Social satire in experimental form: And They Lived Happily Ever After in Writers Resist.